DIVORCE: One of the Great Destroyers of Wealth

ABOUT THE PROGRAM
The Howard County Estate Planning Council is excited to have the Honorable Judge Lenore Gelfman as our keynote speaker for our Fall Program. Judge Gelfman will share her experiences as a judge having presided over divorces ranging from simple to complex financial situations involving businesses, hidden assets and other types assets. Judge Gelfman will provide tips on how our members can support their clients before, during and after divorce.

We will provide Judge Gelfman with the questions you would like her to answer. Please list your question when you register.

After leaving the Baltimore City State’s Attorney’s Office, Judge Gelfman and her husband Richard Gelfman, Esq., opened a general law practice, Gelfman & Gelfman P.A. in 1975. She was appointed as an Associate Judge of the Howard County District Court in 1989, and remained on the District Court Bench until 1996, when she was elected to the Howard County Circuit Court as an Associate Judge. She successfully ran for re-election in 2011.  Subsequently, Judge Gelfman was appointed by former Chief Judge Robert M. Bell as Howard County Administrative Judge, a role she continued until retirement in September, 2018. She now serves as a Senior Judge in all Maryland Courts as well as mediation.

This program is being held at Cured 18th & 21st at the corner of Little Patuxent and Broken Land Parkways.  The official address is 10980 Grantchester Way #110, Columbia, MD 21044. 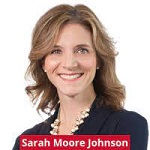 Webinar | Highlights from the 2023 Heckerling Institute on Estate Planning